The uniquely designed Magic Arm below-the-hook crane attachment recently received OSHA's stamp of approval. Based on a review of previously submitted drawings and specifications of the Magic Arm by master distributor Nycon International, Westerly, R.I., the government agency indicated in an interpretation letter that it was not aware of any inconsistencies between the Magic Arm and the current OSHA regulations.

The Magic Arm features a lifting hook and C-shape double pulley to allow operators to deliver construction loads directly to workers on elevated floors without the use of scaffolding or platforms. The Magic Arm can position a loaded pallet directly onto any floor by enabling the crane operator to maneuver the top arm onto the upper floor until it lies flush. The load is then gently lowered onto the floor below. With its sophisticated pulley structure attached to the crane cable, the Magic Arm ensures load weight is carried by the crane's cable and not by the arm itself.

The Magic Arm weighs 827 pounds and features a load capacity of 3,390 pounds, but it was designed for 7.5 tons and tested for 3 tons. Maximum weight load on the floor is 2,480 pounds, but the unit puts no weight on the floor edge. Five standard models are available with customization as an option.

Nycon International notes that the Magic Arm increases construction productivity and savings because it reduces the labor, expense, and time of installing and repositioning platforms. Materials are delivered directly onto the structure's floor where they are needed, eliminating the need for workers to reach out and transfer loads, which is typically involved with scaffolding and platforms. With its large load capacity, the Magic Arm also reduces crane cycles, and it doesn't require complicated training for crane operators and workers.

Summit Construction Co. in Indiana recently purchased the device because of its unique delivery concept, and the Magic Arm is currently being used on an expansion project of the Community North Hospital in Indianapolis. Jerry Harper, Summit's project manager, said, “The Arm eliminates extended loading platforms at every elevation, and we can work multiple floors when landing materials.”

In other news, the Magic Arm has moved west, and Signal-Rite, LLC, San Leandro, Calif., will handle the product distribution in the Western United States, Canada, and the Pacific Rim. On March 15 and 16, Signal-Rite held product demonstrations of the Magic Arm at the Orchard Garden Hotel Project in San Francisco, Calif. Video of the attachment in use and still photography from the event is available for viewing at http://www.signal-rite.org/themagicarm.html. Jeff York, president of Signal-Rite, said he is planning for more product demos in the near future. 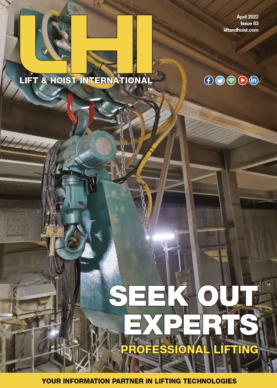