Ravas Europe a manufacturer and distributor of weighing systems integrated in hand pallet trucks, warehouse trucks and forklift trucks has added the Bolzoni Group, a leader in forklift attachments and forks business, as a new partner for the worldwide distribution of the Ravas iForks-32, top of the range in forklift truck scales.

Frank van Rijnsoever, sales and marketing director of Ravas, is excited about reaching an agreement with the Bolzoni Group, he said, “We see a huge market for our iForks. Forus, Bolzoni will be a valuable addition to the existing distribution channels worldwide. We aim to operate more efficiently and to further develop the global market for mobile weighing applications.”

Carlo Fallarini, Bolzoni’s global marketing director, said, “Fork scales are becoming more important in the logistics and forwarding operations. The Ravas iForks-32 has become a benchmark worldwide, thanks to the clean design, easy installation, Bluetooth 4.0 connection and long life Li-ion battery pack. A dedicated Ravas Weights App, available in the App Store and Google Play Store, acts as a remote display and remote control for the scale, but also enables the operator to download weighing data and send these per e-mail.

“The iForks-32 can be easily combined with Bolzoni’s fork positioners. Our customers can receive a full package with fork positioner and already installed weighing forks, including all necessary electronics. We truly believe iForks-32 will become a standard in the mobile weighing applications for forklifts.” 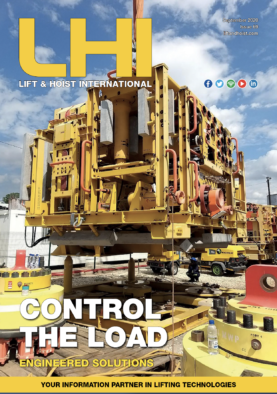