Demag Cranes & Components has received an order for the supply of 14 process cranes from the Thyssenkrupp Marine Systems shipyard to be installed in new production facilities in Kiel, Germany. This is a true milestone project for Marine Systems since it intends to develop the site into an international centre of excellence for building submarines.

Construction of the facilities is already underway in Kiel where Thyssenkrupp Marine Systems is setting up a new shipbuilding facility and developing the site into an international centre of excellence for manufacturing submarines. At this site, Marine Systems will start working very soon on the largest order in its history amounting to around €5.5 billion for the supply of six identical submarines to be completed by the year 2034. Four of the submarines will be delivered to the Norwegian Navy, two to the German Navy. Demag process crane technology will support the building of these submarines.

The individual sections of the submarines will be manufactured in seven bays. The bays are each equipped with two 150t crane installations with a total four travelling hoist units each that run in synchronous operation to handle the individual sections. Demag is building the fourteen double-girder process cranes with three different spans ranging from 16.25m to 35.40m.

The SAW package includes various additional benefits such as load-sway damping, which increases safety at work when handling the heavy loads while at the same time enabling very precise positioning of the heavy submarine sections. Automatic adaptation of the speed to match the weight of the load (extended speed range) increases productivity without compromising the high level of safety. Synchronisation of the long-travel, cross-travel and hoist drives in master/slave mode allows for precise synchronous operation of two cranes and up to four travelling hoist units.

With this crane concept, Demag meets the requirements of its customer thyssenkrupp Marine Systems regarding precision, safety and productivity when handling heavy loads.

Dr Thomas Bönker, senior vice president, Process Cranes said “We are very pleased that we were able to convince our customer Marine Systems of the excellent capabilities of our process crane technology in the context of this very demanding and future-oriented project. As a result, we will be supporting Marine Systems in the implementation. The high travel and positioning accuracy of the cranes will be required, for example, when two submarine sections weighing over 100 t each have to be precisely positioned by two cranes and four travelling hoist units to assemble the hull.”

Marine Systems will begin to build the six class 212CD submarines in 2023. By then, Demag will have manufactured, delivered and commissioned the 14 process cranes. 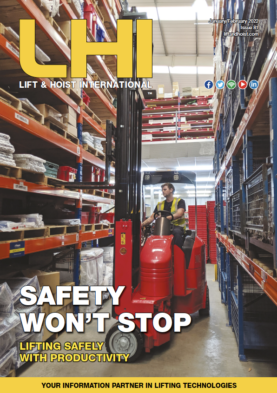